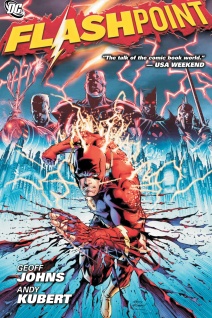 The storyline that started it all.

So what is this New 52 that you keep seeing plastered on the front pages of comic books? Seems like all the comics being churned out by DC has this New 52 thing added to the title. If you’ve seen the latest Superman movie “Man of Steel”, its creators boasted that Superman’s new underwear-sans costume is based on the New 52 Superman. What did they mean by that?

In a nutshell, DC Comics unveiled their relaunch project called New 52 in September of 2011, with the goal of boosting comic sales and attracting new readers. Quick background info – the number 52 has always been special to DC. It was the title of one of their popular storylines that debuted back in 2006 and lasted the entire year. They released 1 issue for each of the 52 weeks. The relaunch was started right after the Flashpoint storyline, wherein The Flash was transported into an alternate timeline all because of a small change he made in the past while time traveling.  When Flash was finally able to fix the timeline, three major things happened:

One, DC effectively canceled all of their existing titles and started anew with fifty-two new ones with this relaunch. For those not familiar with the ramifications, it means that long running titles like Batman (Issue #713), Action Comics (Issue #904), and Detective Comics (Issue #881), titles that have been in existence since the 1930s, had to say goodbye to their record and start from scratch. That’s right. It’s back to issue #1 for all of them.

Two, all existing storylines and the complete history of the DC universe was rebooted. With the exception of some characters, every single DC character got a clean slate on their stories and backgrounds. The famous origin stories are set in stone and unchangeable: Batman’s parents were still gunned down when he was a boy. Superman still grew up at the Kent farm. Wonder Woman is still an Amazon. But all of the adventures they (and almost all of the DC heroes) had are no longer part of this new saga. It’s a fresh new start for everyone! Now this is pretty significant considering this sort of thing doesn’t happen at all. A comic series can get canceled then renewed with a new title, sure. It’s also possible to keep the same title but add an appendage of version 2 or 3. But to do so for all of their active comics? And hit the reset button on all their accumulated history? It is a huge step. Not only do they risk alienating the old fans who’ve followed their favorite series faithfully through the years, but what if the new storylines they implement don’t catch on? It’s a disaster on the same level as Halle Berry’s Catwoman movie.

And three, it served as the perfect excuse for the incorporation of both Wildstorm Productions and Vertigo Comics into the DC fold. It means that previously unknown characters, heroes who are not commonly known by people like John Constantine and Grifter of Wildcats fame, both of which are from Wildstorm Productions, and Swamp Thing can now play in the DC Universe and get more attention.

So the question now is, did it work? According to the sales reports, the gambit paid off and the sales were nothing but phenomenal. All of DC’s newly released titles were sold out and had to be reprinted numerous times. The Justice League comic book was the top selling comic of the year in 2011. Even after all the hype and mad grab for #1 issues has gone down, DC sales have been able to retain the current improved level. It looks like a majority of the old readers prior to the relaunch stayed, and the new readers they garnered were retained.