Anuttara: Your allies’ locations. Their secrets. Their real names. Green Arrow: Okay. *kaff* Okay. You wanna sneak up on Superman? He’s *kaff* he’s got a human identity. He calls himself […]

Deadman: Well, there ya are. They bought it, just like anyone coulda predicted. Next to Superman, Dick Grayson is the one guy alive that every other crimefighter trusts. – The […]

Batman: Captain. You have a dilemma. If we surrender to you, you will have fulfilled your mission. And Tokyo will be decimated. Men, women, and children will have died while […] 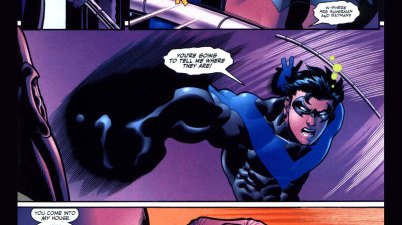 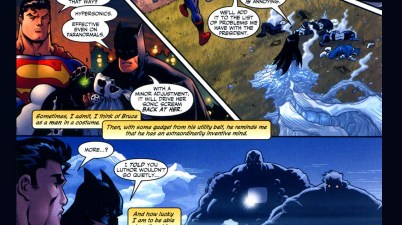 Superman: Sometimes, I admit, I think of Bruce as a man in a costume. Then, with some gadget from his utility belt, he reminds me that he has an extraordinarily […] 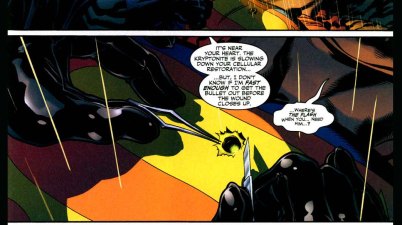 Superman Tells Batman To Buy What 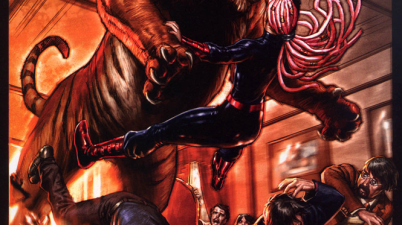 Freddy Freeman: I’ve been told a couple of hundred times that the Gods have taken on new forms… I just didn’t expect any of them to be in, y’know–prison! Zareb: […]

Nightwing: Ow! Hey! Don’t I get any anesthesia? Alfred: The first and second time a wound is closed, most certainly. By the third time you’ve opened your stitches, however, one […]

Iron Man Knows Who Superman Is

Iron Man: Your phasing through them shorted out all the circuitry? Kitty Pryde: Yeah. Happens with any electrical system. And if you’re wearing it, it’s wicked painful. Iron Man: So […]

Martha: But you’re still worried. Jonathan: Well, I have to admit he’s done a good job of stayn’ out of sight, but– Superman: Of course I’m staying out of sight, […]

Flash: You’re not a robot, Vic. Robots don’t laugh at jokes or talk about their favorite television shows or worry that they’re robots. Do you ever fantasize about making out […] 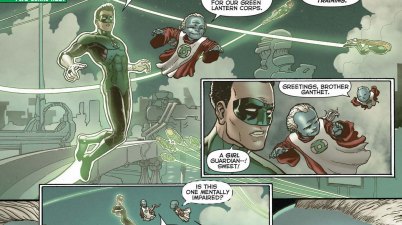 Sayd: Greetings, brother Ganthet. Kyle Rayner: A girl guardian! Sweet! Sayd: Is this one mentally impaired? Ganthet: No, Sayd. He is from planet Earth, like Jordan, Stewart… Sayd: … And […]

Superman is Better With Words

Wonder Woman: Superman, I was– Superman: Worried. I get it. But we only want to help. Green Lantern: How come when I said that, she wouldn’t listen? The Flash: Superman’s […]

Cyborg: Graves knows the Flash doesn’t like working outside of the law because he’s a police officer. He even knows about his relationship with Patty Spivot. Green Lantern: Who’s Patty […] 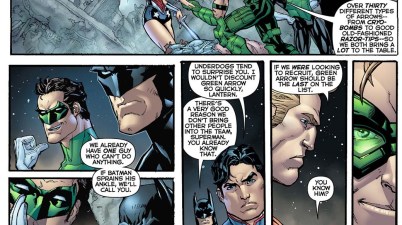