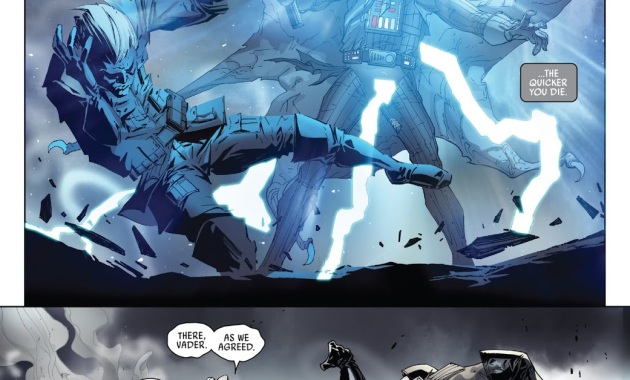 Grand Moff Tarkin learns a valuable lesson about Darth Vader, and comes out feeling thankful that Vader’s on their side. From – Darth Vader Vol. 2 #18

Grand Moff Tarking using tactics against Darth Vader. Smart idea of using slugthrowers and flamethrowers so a lightsaber can’t deflect it back, added bonus that it kinda spooks Vader […]

Darth Vader posing heroically with a Valath skin. Valth’s have the ability to blend with their background. From – Darth Vader Vol. 2 #18

A duel between the Sith Lord Darth Vader and Jedi Ferren Barr, while the Empire’s Star Destroyers are conducting an orbital bombardment on the Mon Calamari cities. It took […]

Jedi Ferren Barr uses the Force to mind trick the clone troopers into obeying Order 66. Since the Inquisitorius were former Jedi themselves, the gambit worked perfectly. From – Darth […]