Not only did the Batman Who Laughs killed the Justice League from his Earth, but he displayed their corpses over a huge Batman symbol. He reserved a special spot […]

This issue is a lot of headache for someone who hasn’t done a reread of a lot of previous issues, especially since the panel orders in this comic issue […]

Superman gets infected and slowly turns into an anti-life equation zombie after he flew straight into the Flash and killing him. Some of Barry Allen’s bones managed to pierce […] 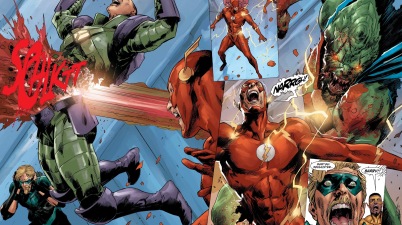