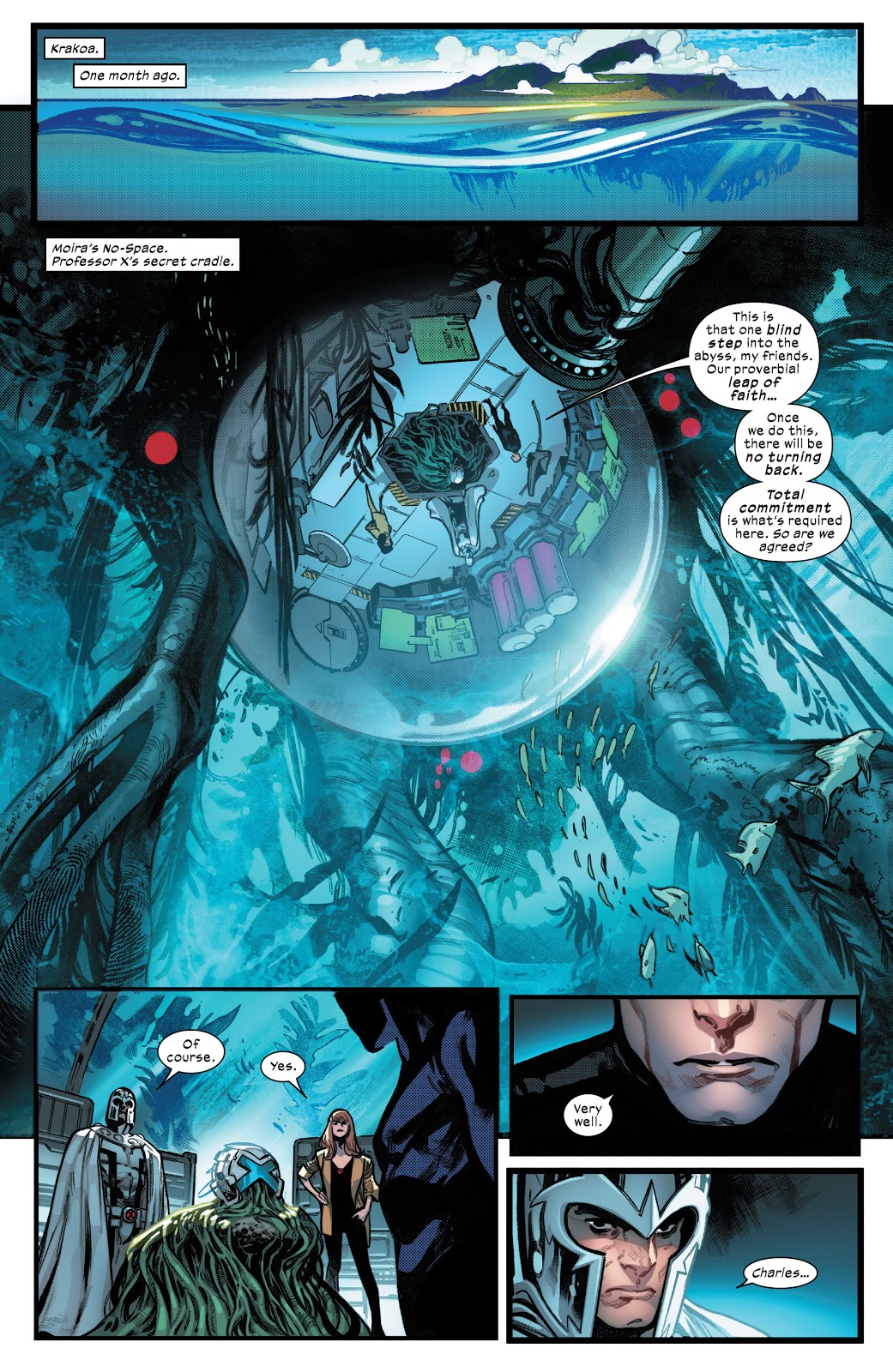 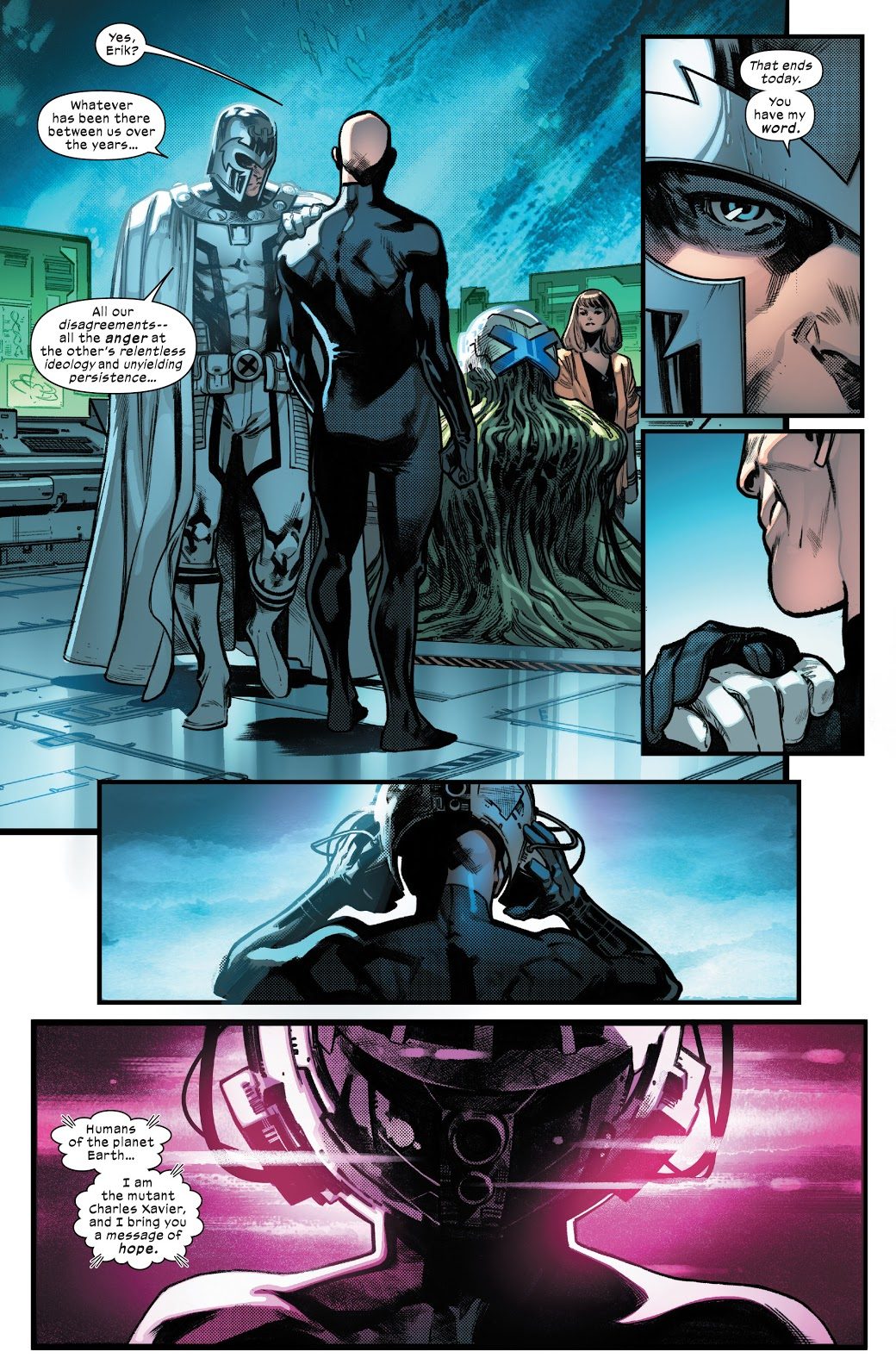 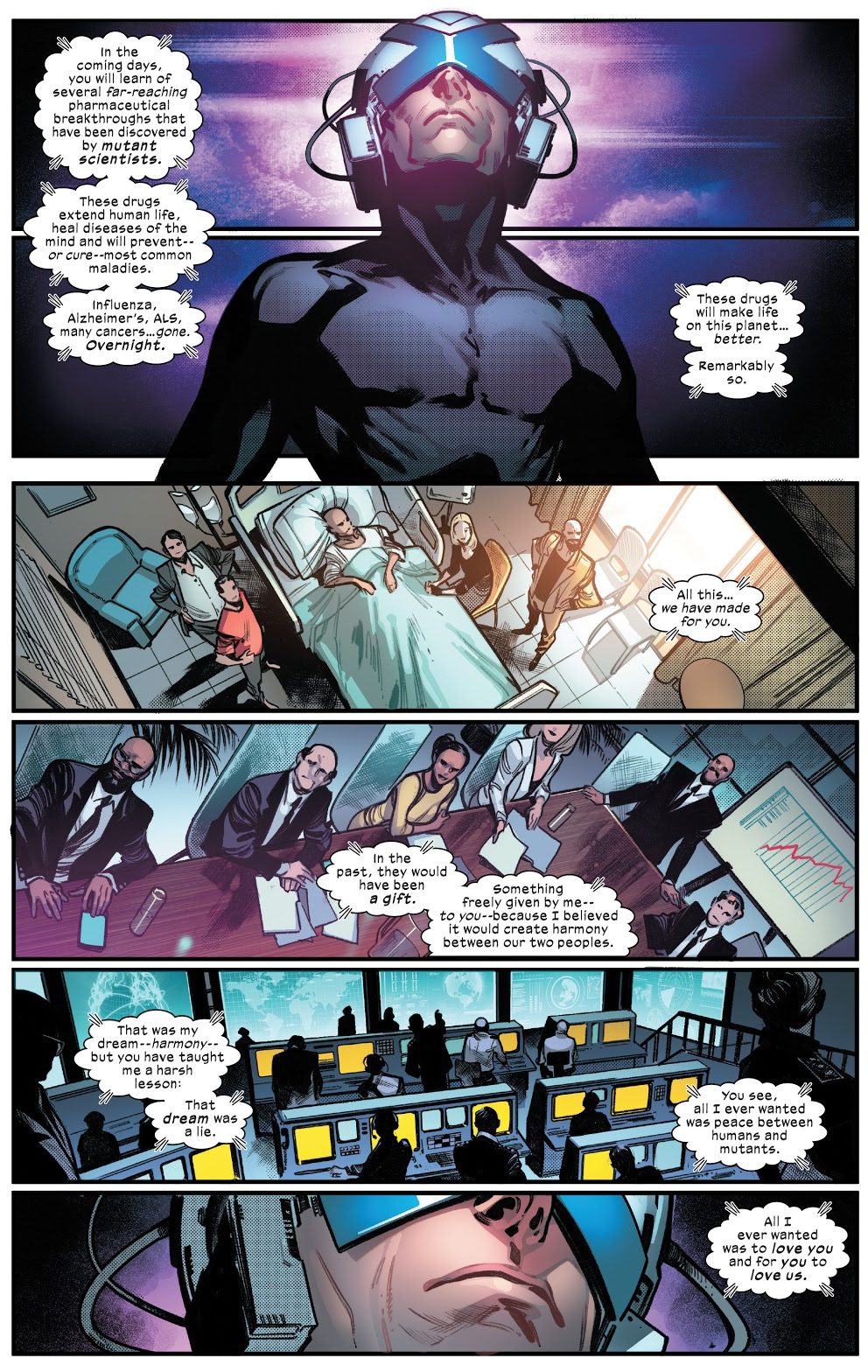 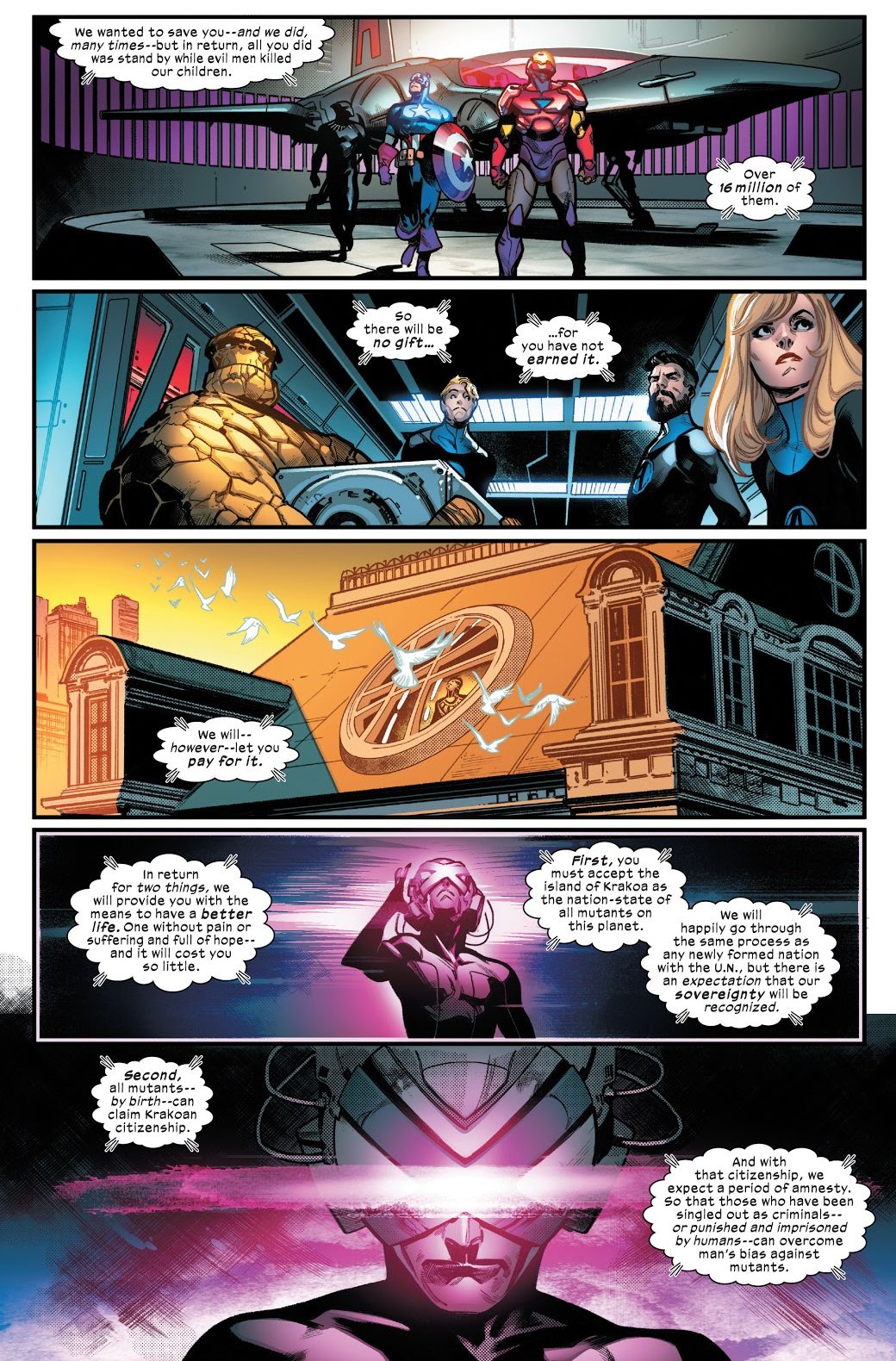 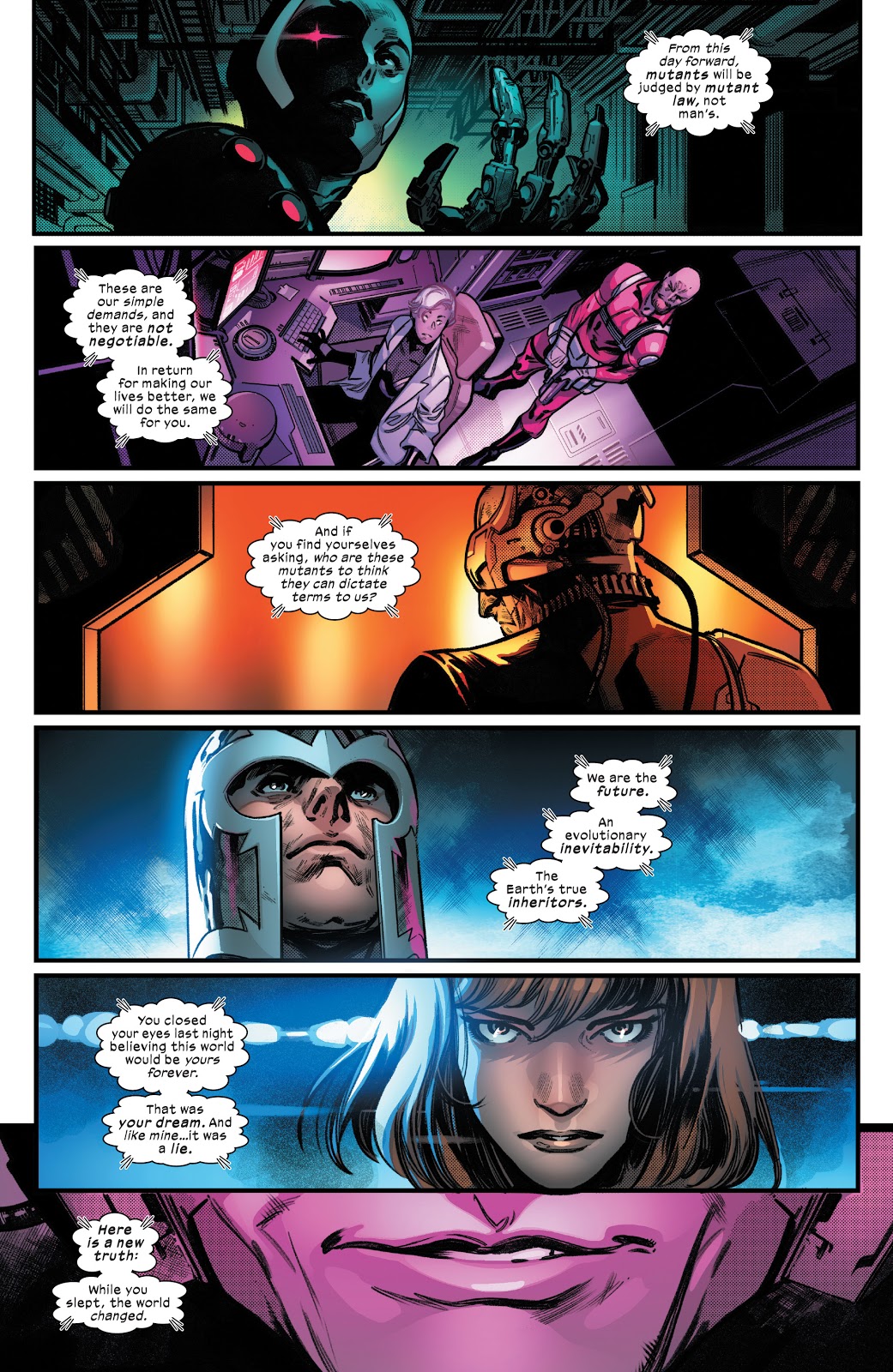 Humans of the planet Earth… I am the mutant Charles Xavier, and I bring you a message of hope. In the coming days, you will learn of several far-reaching pharmaceutical breakthroughs that have been discovered by mutant scientists.

These drugs extend human life, heal diseases of the mind and will prevent..or cure..most common maladies. Influenza, Alzheimer’s, ALS, many cancers…gone. Overnight. These drugs will make life on this planet..better. Remarkably so.

All this.. we have made for you.

In the past, they would have been a gift. Something freely given by me..to you.. because I believed it would create harmony between our two peoples.

We wanted to save you.. and we did, many times.. but in return, all you did was stand by while evil men killed our children. Over 16 million of them. So there will be no gift… for you have not earned it. We will.. however.. let you pay for it.

In return for two things, we will provide you with the means to have a better life. One without pain or suffering and full of hope.. and it will cost you so little.

First, you must accept the island of Krakoa as the nation-state of all mutants on this planet. We will happily go through the same process as any newly formed nation with the U.N., but there is an expectation that our sovereignty will be recognized.

Second, all mutants..by birth.. can claim Krakoan citizenship. And with that citizenship, we expect a period of amnesty. So that those who have been singled out as criminals.. or punished and imprisoned by humans.. can overcome man’s bias against mutants.

From this day forward, mutants will be judged by mutant law, not man’s. These are our simple demands, and they are not negotiable. In return for making our lives better, we will do the same for you.

And if you find yourselves asking, who are these mutants to think they can dictate terms to us? We are the future. An evolutionary inevitability. The Earth’s true inheritors. You closed your eyes last night believing this world would be yours forever. That was your dream. And like mine… it was a lie.

Here is a new truth: while you slept, the world changed.

Gotta say, that’s one awesome speech from Professor X. Humans are actually the winners in that deal, they get a miracle drug and all they have to do is allow mutants to have their own nation.