Last year on September my site hits went into overdrive. On a good day I was averaging 2000 but at one point in that very lucky week, I nailed a very high 5000. That was my record of largest page view ever for a very long time. How it happened? Someone stumbled one of my posts.

I’ve never tried Stumbleupon until that day. I played around with it trying to get a feel of this very useful social media and several months later, I’m a less bit clueless. It’s very simple. You create an account and then you surf through entries submitted by others, where in you can tag them with the like button if they were to your liking. The system then tries to send more similar themed entries your way.

Easy right? Except there doesn’t seem to be a sure proof way of getting people to instantly like whatever post you submitted. I tried submitting several entries and only one managed to reach the same success as the first. And all I had to do was pay $10 to Stumbleupon Paid Discovery. The gist is, you pay them for making sure your entry is submitted in the queue, and then hope it gets enough traction to get stumbled through the masses. 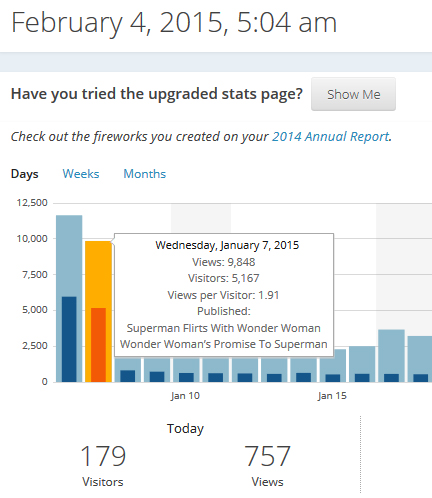 For 2 days, I got more than 20,000 hits, although not all of those were due to Stumbleupon, one user from that social media site graciously posted my entry to reddit. So yeah, $10 well worth the money. I’ve convinced myself that I could just stay indoors an entire weekend and use whatever I might have spent going out to further stumble the blog. Feels like a good plan.