Why am I on trial again?

I hear this question a lot. Depending on the person who hears it, the question would induce a “lol that’s cute”, or a quiet sigh of exasperation.

No, Green Lantern isn’t black. Green Lantern is simply a title of the individual chosen by the Guardians of the Universe to wield a power ring. In DC Comics lore, the entire universe is divided into 3600 sectors and 2 Green Lanterns are assigned to patrol each sector. From there we can effectively conclude that there’s always at least 7200 Green Lanterns on active duty. Sector 2814, where Earth is located, is home to the 4 Human Green Lanterns.

John Stewart was recruited into the Green Lantern Corps as a backup to Hal Jordan, Sector 2814’s designated Green Lantern.  Stewart proved himself to be a good choice as a Green Lantern but pretty much stayed in the background of the fan favorite Jordan.  Stewart’s popularity rose when he was chosen by writers as the Green Lantern for the Justice League animated series which debuted in November of 2001. 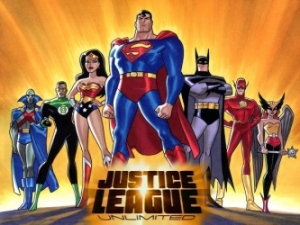 In our series, Green Lantern is black. And Batman sings.

The series would last 5 seasons, all the while spawning a seemingly endless supply of toys and merchandise. Everywhere you looked there were bags, tshirts, lunchboxes, coloring books. I like the series so it didn’t bother me. But this caused a curious side effect: it completely indoctrinated every person who’s never read the Green Lantern comics into thinking Stewart IS the only Green Lantern of Earth.  So in a sense, you can say Green Lantern is black as long as you’re referring to John Stewart. But to imply that there’s only one Green Lantern is incorrect. Depending on who you ask, Stewart will most probably be the least liked Lantern of the four. 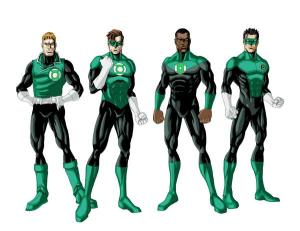 We only call him when we need to play badminton pairs.