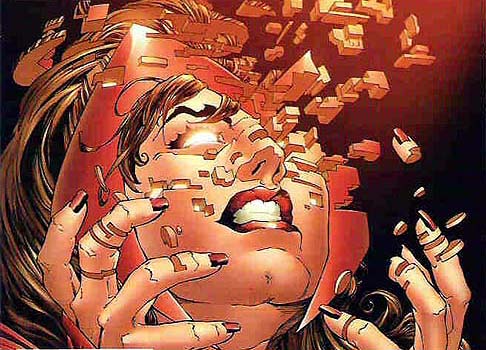 For the past few years, nothing  has completely changed the status quo of the Marvel universe than these three simple words. If you’re planning on diving into the current storylines of any Marvel comic, it’ll be a good idea to familiarize yourself with the House of M story arc.

Wanda Maximoff, better known as the Scarlett Witch, suffered a complete mental breakdown. Because of her reality warping powers, she became a very dangerous threat to the safety of the planet. The Avengers and the X-men, gathered by Professor X, began discussing their plan of action. A few individuals like Wolverine and Emma Frost advocated for Wanda’s death, deeming it a mercy and the safest course of action for everyone, while the rest balked at the idea. Stalling for a solution, Captain America decided the Avengers needed to talk to Wanda before coming to a decision.

The entire group went to the ruins of Genosha where Wanda was being kept under the close supervision of Professor X and Magneto. But unbeknownst to them, Wanda’s twin brother, Quicksilver, overheard their discussion about possibly killing Wanda. He rushed to Genosha ahead of them and warned Magneto of the plot to kill his daughter. Helpless, Magneto could offer no solutions to his devastated son. As a last resort, a desperate Quicksilver convinced his vulnerable sister to use her powers and alter reality. The result was the House of M.

In this alternate reality, mutants were the dominant species and ruled over the humans. Ruling over the mutants from their fortress in Genosha was the House of Magnus, with Magneto as head. All of the other heroes had their fondest wishes come true in this reality with no memory of the original. Peter Parker was married to Gwen Stacy, with whom he had a son. They lived together with his Aunt May and Uncle Ben, who was alive in this reality. Cyclops was happily married to Emma Frost. Captain America was an old retiree living peacefully in the Bronx.

But not everyone’s memories were tampered with. Wolverine, whose greatest desire was to remember his memories that were wiped out by the Weapon X project, was granted his wish. Not only did he remember everything from his past, but he was able to retain his memories of the original world. With the help of  a little mutant girl named Layla Miller, whose curious mutant ability could make someone remember the original reality, Wolverine began gathering allies for an assault on Genosha.

A huge battle was fought on Genosha and during all the fighting, Magneto’s memory was also restored. In a great rage, Magneto confronted Quicksilver about the damage the latter did in his name. Waving away his son’s explanations, Magneto proceeded to pummel him to near death with a few pieces of large steel. Disgusted by her father’s choice of choosing mutants over his own family again, Wanda healed her brother and uttered the three words that changed everything.

With that spell, the fake reality disappeared and everything went back to normal – at a terrible price. 99% of all mutants in the world suddenly lost their powers. In the blink of an eye the entire mutant population was decimated with only a few hundred remaining. A broken and powerless Magneto was left in Genosha by the X-men as his punishment. The Scarlet Witch lost her memories and recreated a new life for herself in a small European town. The event came to be known as M-day and decidedly marked a new chapter for the X-men.