Green Lantern is one of the founding members of the Justice League. When you say “Green Lantern,” most people would think of Hal Jordan (or possibly John Stewart if they’ve been watching the animated series). Green Lantern, however, is not just one guy. The Green Lantern Corps is made up of 7200 individuals that acts as a “police force” for the entire galaxy. Below is a run-down of the top 10 Green Lanterns that you should be familiar with. 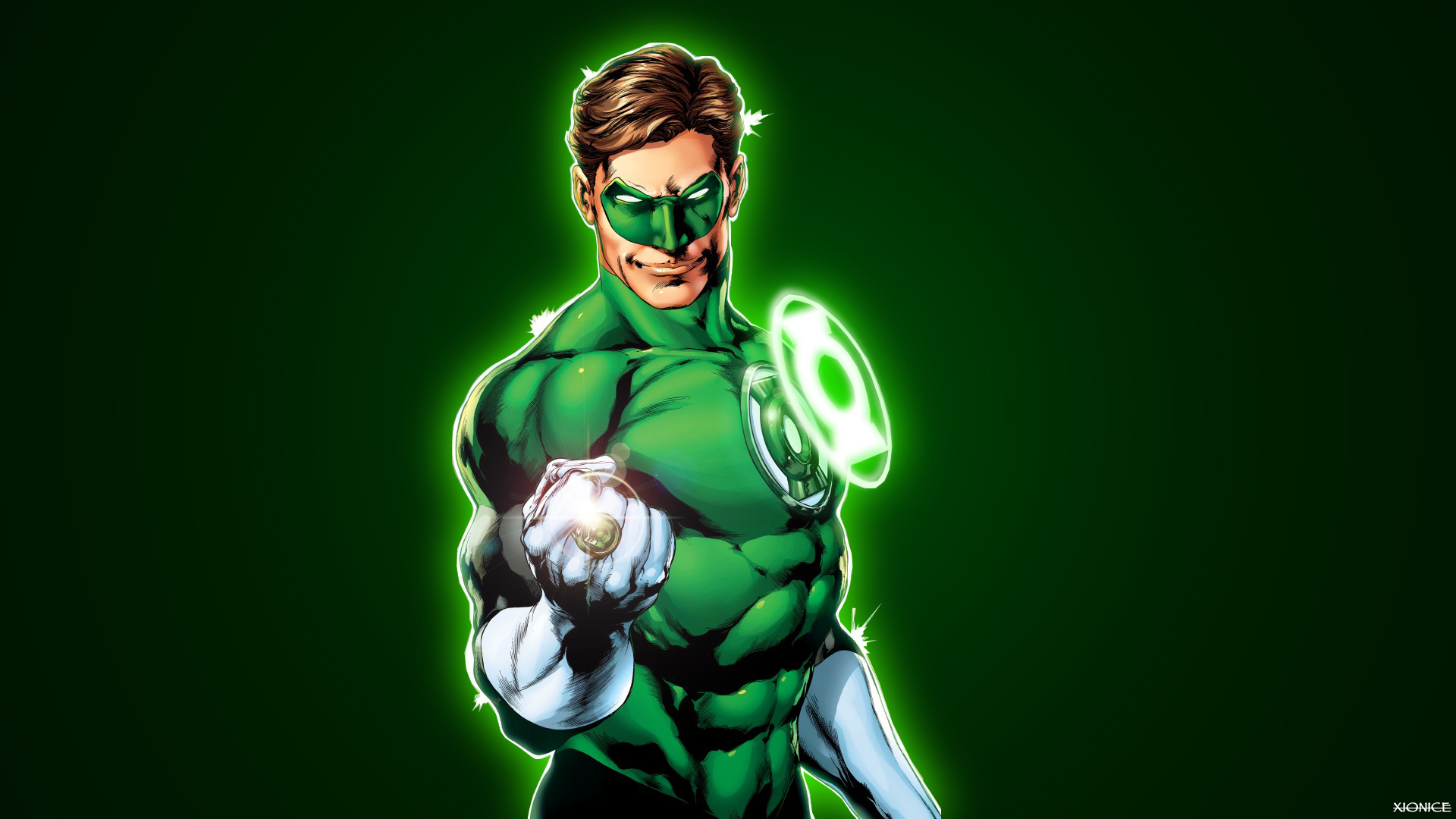 Harold “Hal” Jordan is arguably the most popular Green Lantern. Not surprising as he has been called “The Greatest Lantern.” A title he took from his good friend and arch-nemesis Thaal Sinestro after the latter was unceremoniously ejected from the corps for setting up a dictatorship in his homeworld. Hal was also the first human to be inducted into the prestigious Green Lantern Corps.

Hal was a test flight pilot by trade. Flying around in untested aircraft no doubt requires immense amounts of daring and bravery. This trait made Hal a perfect candidate to be a Green Lantern since one of their requirements is for the individual to be able to overcome great fear. Hal was assigned to space sector 2814 which included Earth, a responsibility he inherited after an grievously wounded Abin Sur crash landed on Earth and gave his power ring to Hal. Abin Sur died shortly after handing over the most powerful weapon in the universe to Hal.

In the Reign of the Supermen! story arc, Mongul destroyed Hal’s home town of Coastal City, murdering it’s 7,000+ inhabitants, including Hal’s family and friends. This resulted in Hal’s depression and subsequently turning into the villain Parallax. He then made his way from Earth to Oa, injuring and killing all Green Lanterns and Guardians that got in his way.

He was also briefly a ghost named Spectre after sacrificing himself to save the Earth. 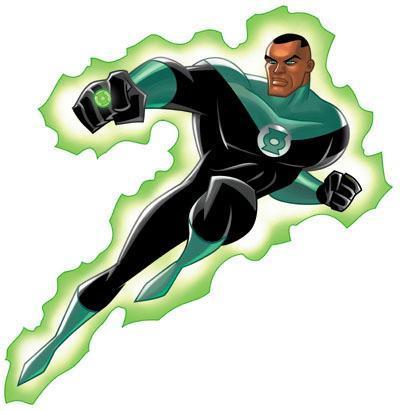 John Stewart was one DC’s first black superheroes. He is also the Green Lantern featured in the DC Animated Universe’s (DCAU) rendition of Justice League and Justice League Unlimited. He was an architect and veteran U.S. Marine. This is evident in his constructs where he builds complex mechanical projections with multiple moving parts as opposed to Jordan’s usual giant fist.

He was selected by the Guardians of the Universe as a backup for Jordan for space sector 2814 should Jordan be unavailable to fulfill his role as Green Lantern for any reason. During his time in the Corps, he married a fellow Green Lantern named Katma Tui, who is from the planet Korugar, the same planet that Sinestro is from. 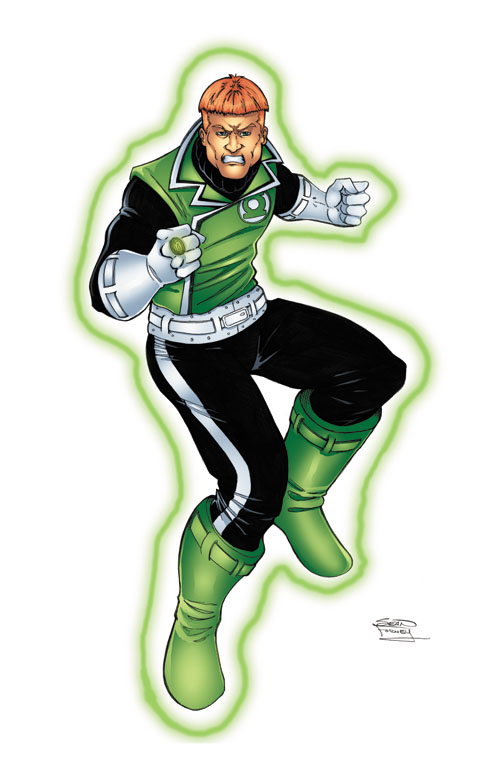 Guy Gardner was one of two humans Abin Sur’s ring selected when he crash landed on Earth. (The other human was Hal Jordan). The only reason the ring chose Jordan instead of Gardner is because Jordan was physically closer to Abin Sur at the time.

Guy Gardner had a rough childhood. He grew up with an abusive drunk father who favored his older brother and would beat him everyday. He spent most of his childhood trying to win his father’s approval. As a teen, he grew to be a bit of a juvenile delinquent and had a few run-ins with the law. He constantly defied authority and this trait has been carried on even after he was inducted into the Corps. He constantly defies the Guardians of the Universe and views the Corps’ code of conduct as more of a guideline than a rule.

After school, he worked briefly as a social welfare case worker dealing mostly with prison inmates. He decided that it caused his rage to flare up more often than he’d liked so he shifted to working with children with disabilities.

He was temporarily assigned to sector 2814 while Jordan was out gathering recruits for the corps. Upon Jordan’s return, Gardner decided to challenge him where the loser must resign from the corps. Sadly, Gardner lost to Jordan and gave up his ring. He spent some time wearing Sinestro’s ring after Sinestro was executed by the Guardians of the Universe, but he was defeated in an encounter with Parallax (Hal Jordan) where Jordan destroyed the yellow ring.

Guy is the ultra-macho “red blooded American” Green Lantern. He’s more of a cowboy than Hal’s cool calm and collected persona. He once challenged Batman for leadership of the Justice League International where Batman knocked him out with one punch. 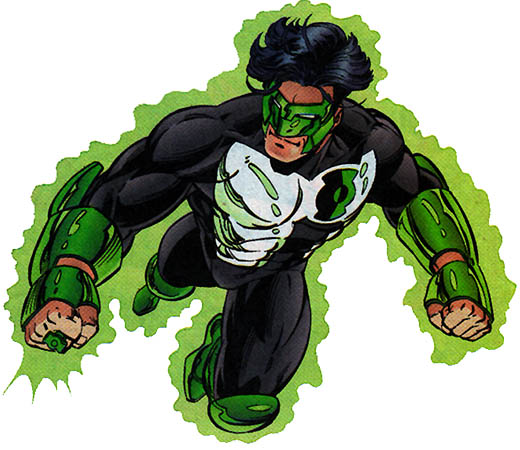 Kyle Rayner was a gifted graphic artist before he joined the corps. His background is evident in his constructs, as he favors manga, mecha, dragons, futuristic weapons and all sorts of comic book themed constructs. Kyle first acquired the power ring when Hal Jordan went on a mad rampage after his home city was destroyed by Mongul. Hal destroyed most of the Green Lanterns and Guardians, but the last surviving Guardian, Ganthet, came to Earth, found Kyle, and gave him the last power ring.

Being the last Green Lantern, Kyle did not have the luxury of “boot camp.” Instead, he had to figure out how to use the ring himself (and a little bit of help from Golden Age Green Lantern, Alan Scott). 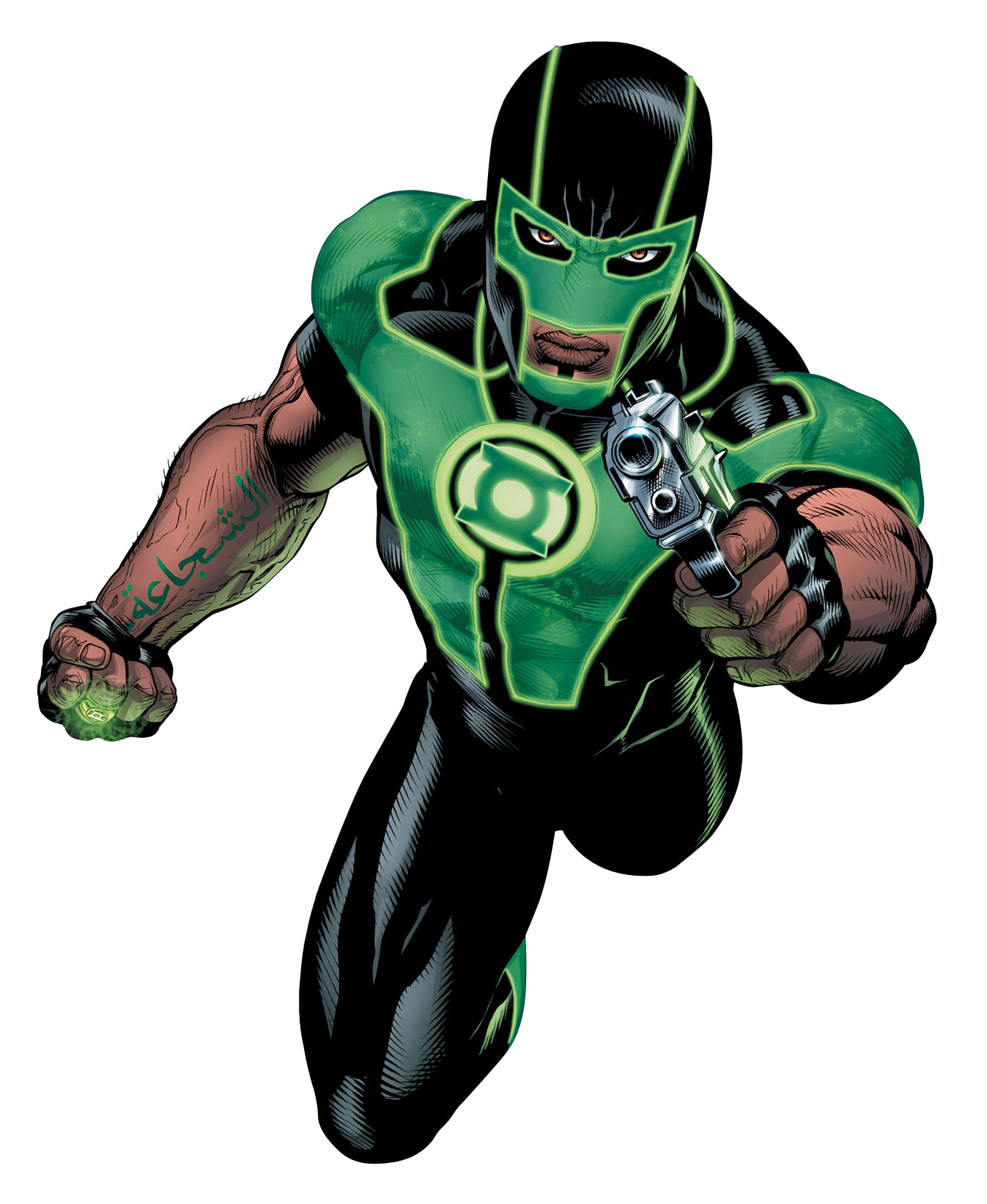 Simon Baz is the newest addition to the Corps. He first appeared in DC’s new52 reboot in 2012. He was a Lebanese-American living in Michigan at the time of the 9/11 attacks. The poverty in his home town drove him to street racing and petty theft. When Sinestro’s ring, and Hal Jordan’s ring construct fused together, it chose Simon as the new Green Lantern. Since the ring bore Sinestro’s personality, the ring chose someone more like Sinestro than Hal — someone who is willing to do whatever it takes to complete the mission.

Simon is a bit brash given his criminal background, but he is brave and his will is strong, making him a very welcome addition to the corps. Simon hasn’t been around for very long yet so his story is still developing. We’ll just have to wait and see if Simon does indeed deserve that power ring. 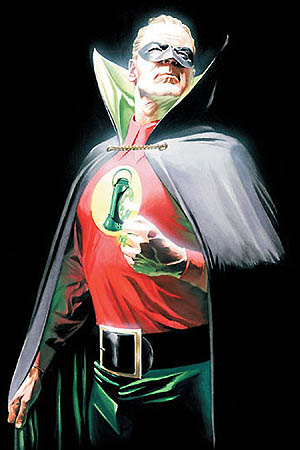 Alan Scott was the original Green Lantern from the DC Golden Age. Unlike the rest of the entries on this list, Alan Scott is not a member of the Green Lantern Corps. His ring was not forged by the Guardians and unlike the power rings of the other Green Lanterns, Alan’s ring is powered by magic from a big green meteor that fell in ancient China.

Although his powers are similar to the rest of the Green Lanterns, there are some minor differences. Alan’s ring allows him to fly and project constructs like the rest of them, but he can also walk through solid objects, paralyze or blind people temporarily, hypnotize people, read minds, and time travel. His power ring also shares the weakness to yellow as the other Green Lanterns do, but unfortunately, he also has a weakness to wood, making him the only superhero you could take out with a no.2 pencil.

Alan was later awarded honorary membership in the Green Lantern Corps but is otherwise unaffiliated with them. 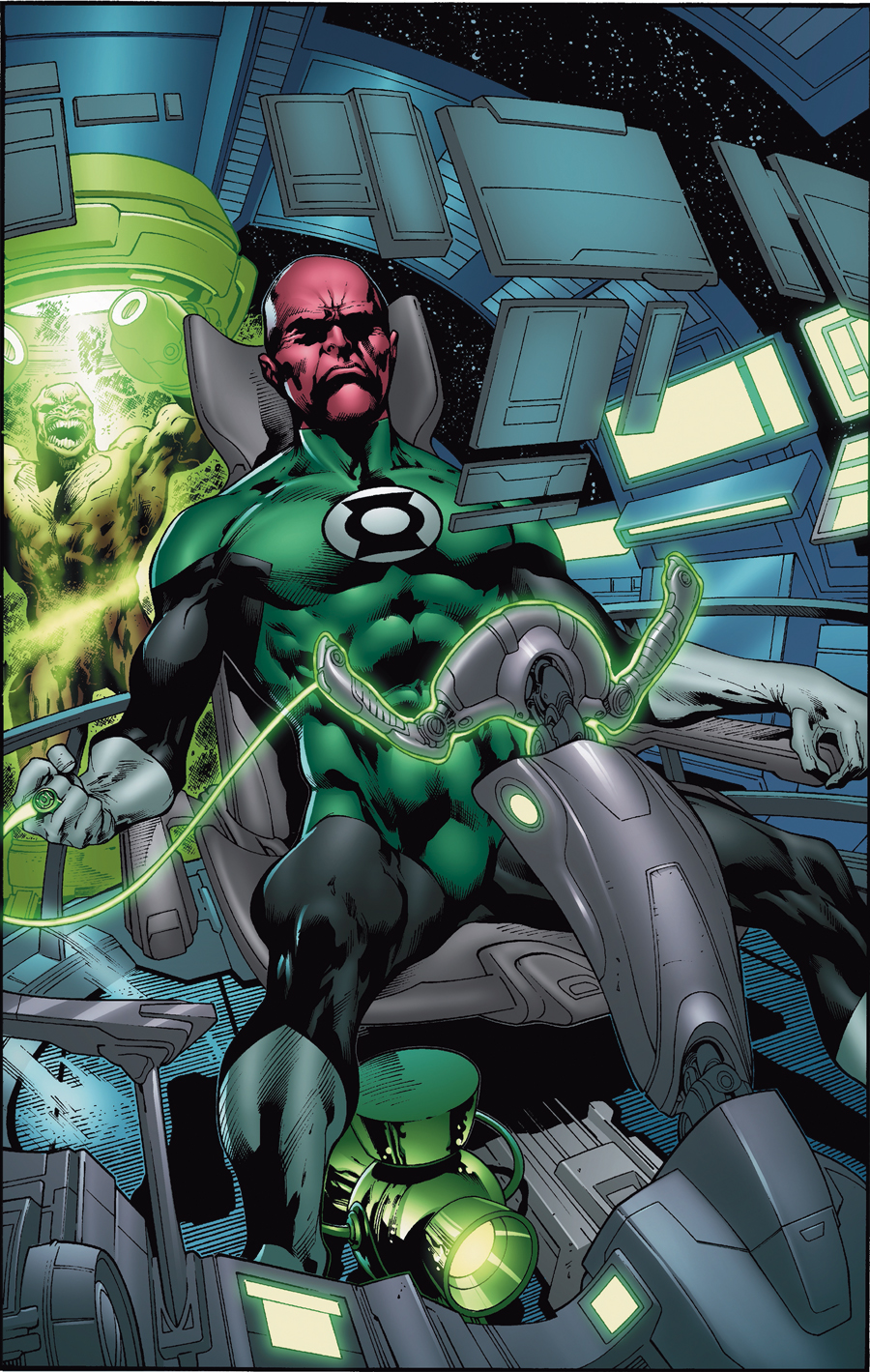 Abin Sur was the predecessor of Hal Jordan as the Green Lantern for space sector 2814. He is from a planet called Ungara. His space ship crashed on earth and a fatally wounded Abin Sur sent his ring to find a replacement and it subsequently found Hal Jordan, the new Green Lantern for space sector 2814. Abin Sur is also Sinestro’s brother-in-law and uncle to Sinestro’s daughter, Soranik Natu. 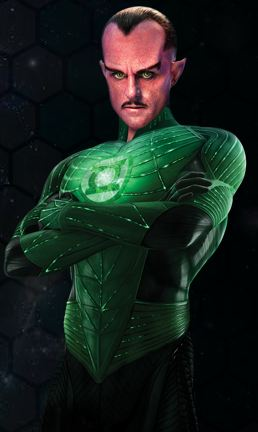 Thaal Sinestro is the yellow-ring-wielding arch-nemesis of Hal Jordan. Those of you who watched the fairly recent debacle of a Green Lantern movie would know that Sinestro was not always Hal’s enemy. As a matter of fact, Sinestro is Hal’s mentor and friend. Despite being on opposite sides, Sinestro has always considered Hal a very good friend. He is much like the Magneto to Hal’s Professor X. Sinestro is not such a bad guy, he’s actually fighting for order in the galaxy just like the Corps, although his methods may be a bit questionable. 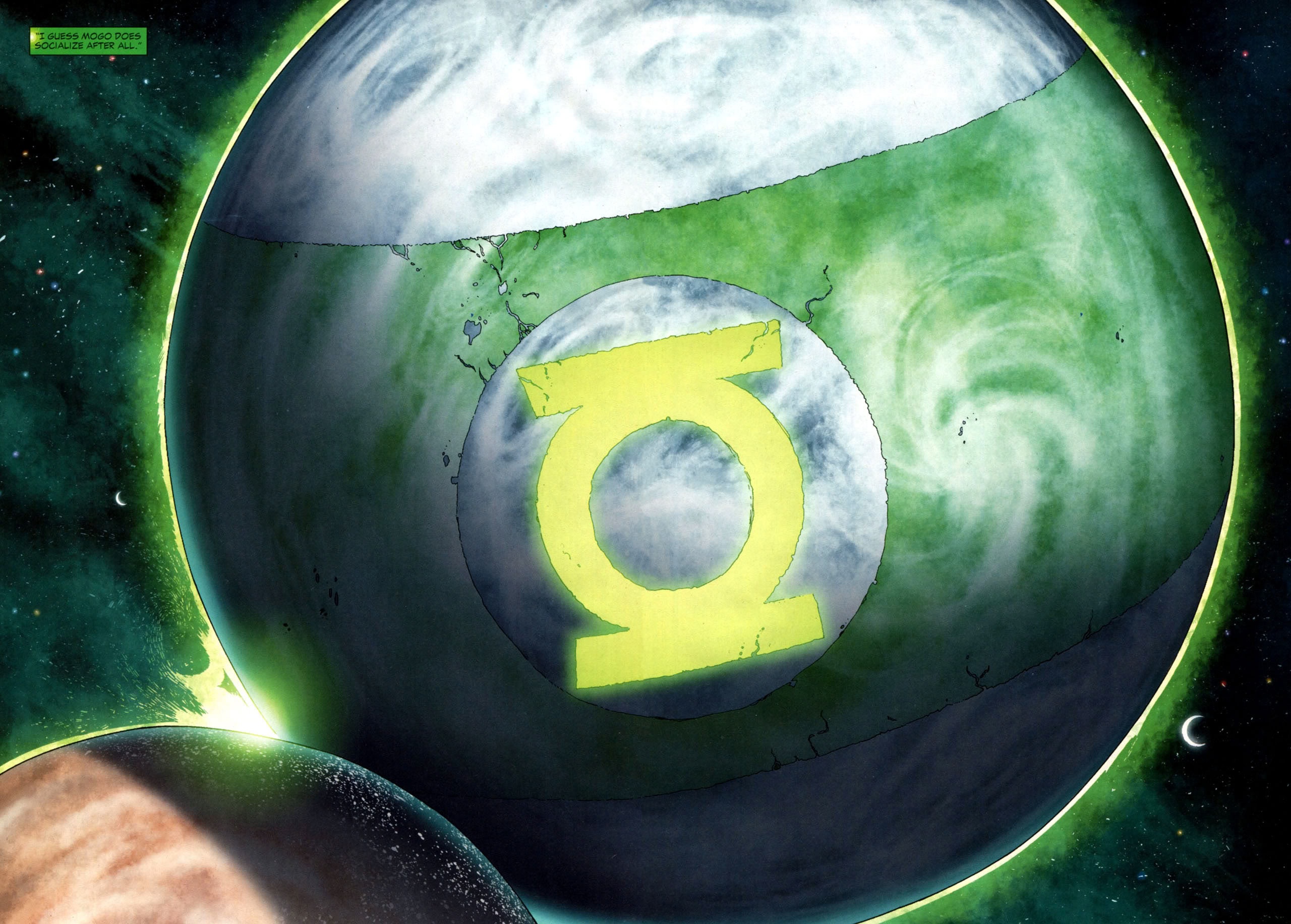 Besides the standard Green Lantern powers, Mogo has a few more, seemingly as an effect of his sheer size. He is able to control his own weather and gravity. Also, in the blackest night arc, Mogo was able to absorb the Red Lantern energy that seized Guy Gardner after he was enraged by the death of his friend and comrade, Kyle Rayner.

Written by Blue Endaya. Blue is a proud DC fanboy who volunteered to write about the Green Lanterns in hopefully the first of many entries.

3 thoughts on “Know Your Green Lanterns”