Comic Characters In Band Of Brothers

Who doesn’t love the HBO series Band of Brothers? I read the Stephen Ambrose book after watching the series 10 years ago, and then methodically tracked the other memoirs that sprung up after the hit show was aired. Each time I finish a novel, I make it a point to watch the entire series again with new eyes and a fresh perspective, eager to see if the series included what new tidbit or anecdote I learned from the last book. This time I just finished reading “In the Footsteps of the Band of Brothers,” which featured the author Larry Alexander and Easy Company veteran Forrest Guth as they revisited the locations that Easy Company fought in 70 years ago. So anyway, I was in the middle of the series marathon when I found to my surprise that familiar faces kept popping up from one scene to another. A quick Google search and here it is, a list of actors who also figure in comic book movies and TV series. 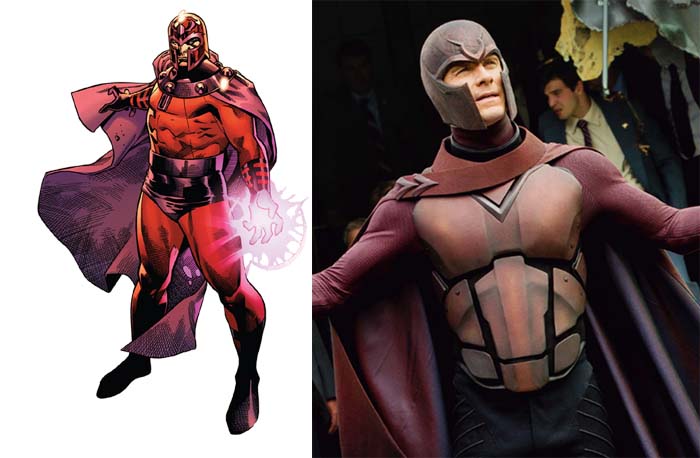 He may be the feared Master of Magnetism in the X-men movies, but in Band of Brothers, Michael Fassbender was definitely afraid of someone else: Enter Captain Sobel. Fassbender portrayed Sgt. Burton Christenson, and we first see him in Camp Toccoa along with the other trainees. His memorable scene was in the aftermath of a night march. Captain Sobel orders everyone to empty their canteens, and Fassbender was caught red-handed when his canteen emptied quickly, announcing to everyone present that he went against Sobel’s orders not to drink during the march. His punishment? He was made to march the whole 12 miles from scratch, in the dead of night. That’s right. He got schooled by Ross Geller. 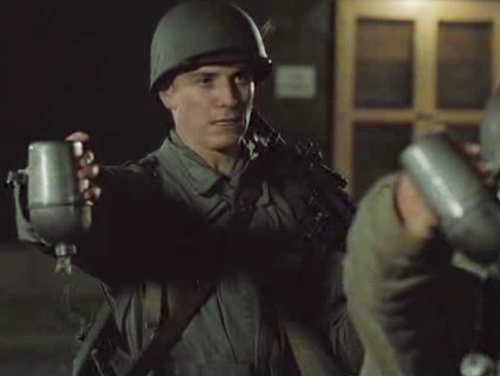 In 1997, a pilot episode for Justice League of America was created in the hopes of having it picked up by a network. Speaking objectively, it was so bad that the next iteration of the Justice League we got was the awesome animated series, so I guess it was a good thing the pilot tanked. But within the eighty-six minute monstrosity, Matthew Settle plays the cocky badass Guy Gardner of the Green Lantern Corps. In Band of Brothers, he’s also a tough and aggressive SOB who doesn’t shy away from a fight. You can say it fits that he portrayed Captain Ronald Speirs, a fearsome killer who once ran back and forth through enemy lines during a firefight in order to coordinate plans with another company. Speirs was eventually promoted to take charge of Easy Company and was their Company Commander until the war ended. Tip: Don’t accept any cigarettes from this guy if you know what’s good for you. 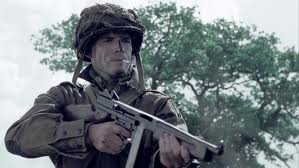 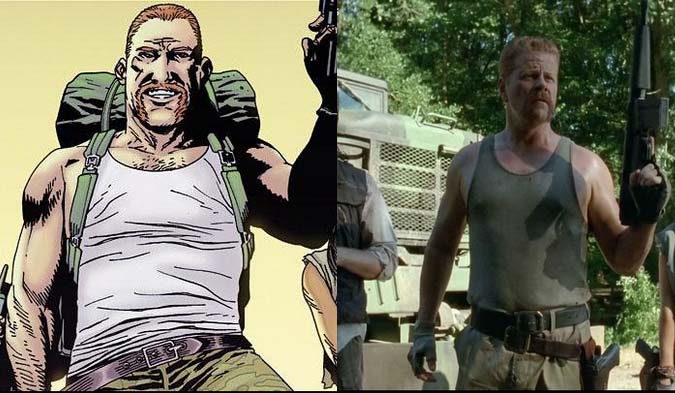 Major Dick Winters, the undisputed leader of Easy Company, described the tobacco-chewing  Denver “Bull” Randleman as one of the finest soldiers he ever had. Actor Michael Cudlitz had a tough job ahead of him to give the part justice. Prior to filming the series, all Band of Brothers actors were subjected to a brutal boot camp to familiarize themselves in the army way of life, and Cudlitz was fortunate in that part since he went on to play  an army character again in The Walking Dead, the wildly popular TV series which is based on an ongoing comic series of the same name. In it he’s Sgt. Abraham Ford, a zombie apocalypse survivor on a mission to bring a scientist to Washington, DC. He encounters Rick Grimes’s survivor group and eventually joins them, becoming the group enforcer and Rick’s right-hand man. 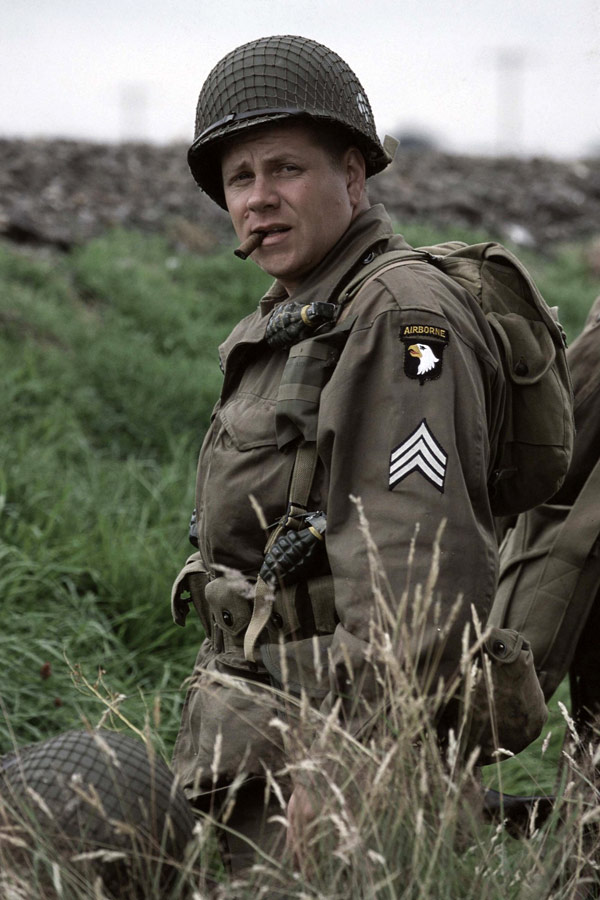 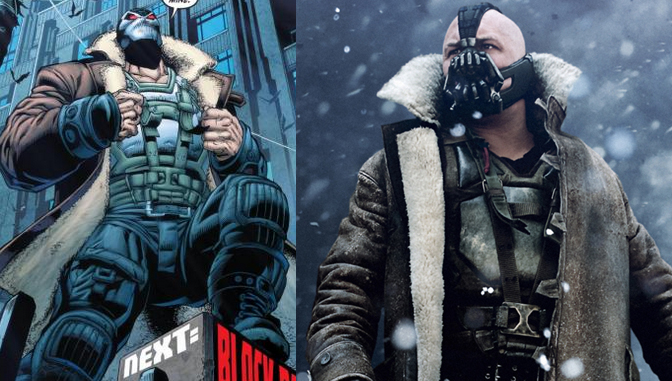 Before he was the massive Bat-breaking Bane in the The Dark Knight Rises, the very average-built Tom Hardy had his first ever role in Band of Brothers starring as Private First Class John Janovec. He only started appearing in the last two episodes but makes up for it by being in successive hilarious scenes. En route to a new destination, a fellow paratrooper asks him what he was reading and Hardy replies that it was an article on why they fight, and apparently the answer was “It seems the Germans are bad,” eliciting laughter from the rest. And probably one of the funniest moments in the series: he was enjoying the company of a European lass when their romp was interrupted by Captain Ronald Speirs asking where his loot of German silverware was located. He answered his superior with a straight face while on rigid attention.

Here’s his entire NSFW scene in all its glory. It’s not every day you get to see Bane and Green Lantern interact. 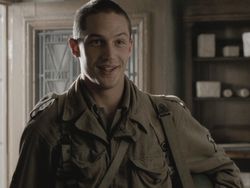 Neal Mcdonough is another actor who is no stranger to the soldier role. In 2011, Mcdonough played the part of Dum Dum Dugan in Captain America: The First Avenger, a role he would continue portraying  in the TV spinoffs Agent Carter and Marvel: Agents of SHIELD. Dum Dum Dugan was a World War 2 soldier who belonged to Nick Fury’s Howling Commandos, although in the movie version the team was led by Captain America. In Band Of Brothers, he’s Lt. Lynn “Buck” Compton, the officer that Dick Winters admonished for being too close to the men he’s supposed to lead in battle. Buck would leave Easy Company during the Battle of the Bulge, suffering from a breakdown after seeing two of his closest friends get their legs blown to bits by German artillery. Also, Mcdonough lent his voice as the DC Comics villain Deadshot in the animated movie Assault on Arkham. 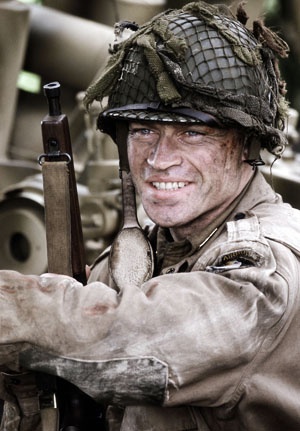 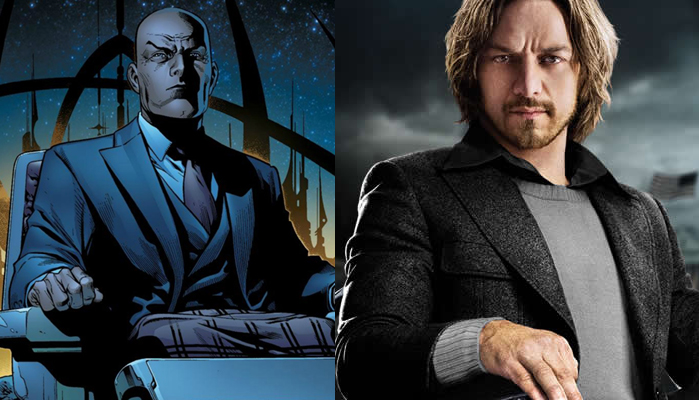 And last but not the least, the most interesting trivia of all. Imagine Professor X and Magneto being in the same company! James Mcavoy, also of X-Men fame, was cast as Private James Miller, one of the replacements added to Easy Company after it suffered losses in the Normandy jump and the battle to take the town of Carentan. Even though he was only in one episode, Mcavoy had considerable screen time and his character was used to show the cold treatment that replacements received from their more mature and experienced comrades. His character, Miller, was accosted by an original Easy Company paratrooper for wearing a unit citation ribbon in an operation that he didn’t participate in. Not wanting things to escalate any further, Miller reluctantly removes his ribbon. He would later die in the company’s next battle. 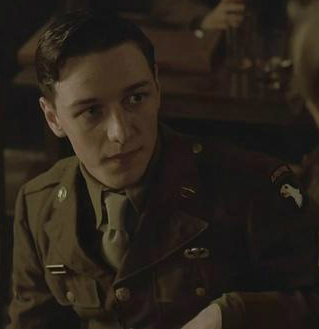