Zombie Wonder Woman from the DCeased series is an absolute beast. She was outnumbered 3 to 1 by Cheetah, Solomon Grundy and the Creeper, but still managed to kill […] 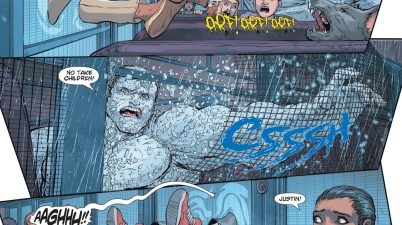 Solomon Grundy decapitates zombie Bane easily with his hands, then throws the head towards charging zombies, accomplishing a head butt without a body behind it. From – DCeased: The Unkillables […]

So that’s why Shazam didn’t make an appearance on the previous DCeased issues. Damn, he got turned into a zombie as Billy Batson. So that’s another heavyweight taken out […]

A zombified Wonder Woman from the anti-life equation easily kills the immortal Vandal Savage by ripping him in half. She then kills Captain Cold and turns him into a […]